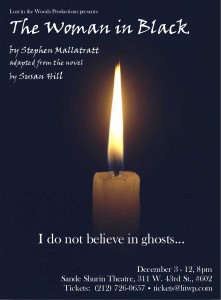 One of our first productions was an off-off-Broadway production of “The Woman in Black” by Stephen Mallatratt.  It’s a spooky tale set in Edwardian England about a lawyer who, as a young man, had an experience that frightened him so that, even now as a middle-aged man, he still can’t talk about it.  And when the children, gathered at his house for the holidays, insist that he take his turn at their English tradition of telling ghost stories on Christmas Eve, he is so overwrought by the memories that he snaps at them to leave him alone.

In an effort to make them fully understand his experience, the man, named Kipps, hires a professional actor to help him tell the story in the way that it deserves.  The actor decides that way is with the two of them acting it out on stage.  But is there more to this staging than meets the eye?  Only the audience can tell.

Improving the world one production at a time.